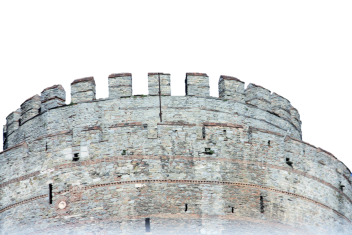 Given all that I went through just getting on the last bus to Istanbul, I honestly was not surprised that the bus ride and tour itself would be everything that encapsulates my life in Bulgaria so far: strange, comical, ridiculous to a point just south of idiotic while still, however clumsy it might be, warmly heartening. Bulgaria is a beautiful country with kind and endearing people, but it also adheres to ideas that not only frustrate my American sensibilities but also leaves me internally grateful for those sensibilities.

The group of about 50 people that left Blagoevgrad at 8:30 p.m. on a Thursday night essentially consisted of three distinct groups: (1) about 25-or-so mostly international AUBG students (a few from Bulgaria, one or two from the United States, the rest from everywhere else, all of whom knew somebody else on the bus); (2) about 25-or-so Bulgarians, mostly women, nearly all of them from Blagoevgrad and many of them close friends; and then (3) me, the professor and Amerikanski who didn’t know the language or anyone on the bus.

I at first thought it a smart plan to leave at 8:30 at night for the ten—hour ride to Istanbul, thinking we would sleep most of the way. But, no, of course that’s not what happened.

The college kids in the back of the bus did what college students do anywhere when left relatively unsupervised on a midnight road trip: Party! Our Bulgarian tour director confiscated a nearly empty quart bottle of tequila, but I suspect there was more she didn’t find. That they got drunk should have been expected, and when people drink they tend to have frequent need of a restroom, which also should have been expected. However, the lavatory on the bus was broken, something the kids discovered in agony and loud outrage. That the bus driver and tour director did not immediately stop the bus every ten minutes or so only added to their indignation. The kids eventually passed out after hours of football soccer chants and squeals of outrageous delight to everything anyone said even remotely amusing.

So that kept me awake half the night. And when the racket subsided, I quickly grew weary of the music coming from a speaker right over my head. It was Elton John, a greatest hits album I believe, playing over and over. I didn’t complain, however, until the music was switched to American techno dance hip-hop. It was about two in the morning when I politely asked the only member of the tour entourage who spoke English if they could possibly turn the music off or, at the very least, turn it down. They apparently tried to turn it down, but moved the knob the wrong way and instead turned it up. When the bus driver realized his error, he turned the volume back to where it was.

I let it go until, honestly, I couldn’t take it no more. A female singer, I think it was Beyoncé, lamenting over and over again that “Baby I can’t get you off my mind mind mind mind mind, I can’t get you off my mind mind mind mind,” propelled by a synsithizer turned up to 11, is not normally what I listen to when going to sleep. So I complained again, something pretty rare for me. A member of the Bulgarian tour entourage actually came over to my seat and leaned in so she could hear what I was complaining about. She was a young woman, in her 20s, and I could tell she did not have a problem, no problem whatsoever, with listening to American techno dance hip-hop at 3:30 in the morning, but nevertheless she had the music turned down. Not off, mind you, just down enough that it was now just a slightly dull pounding.

The 10-hour bus ride actually took about 12 hours, what with all the bathroom breaks, and so it was about 8:30 when we finally stopped on a very busy street in Istanbul. It was then announced (in Bulgarian and English) that we would now begin, as promised on the travel brochure, our “panoramic tour” of the city. I’m nearly drooling from total exhaustion when a nice Bulgarian gentleman boarded and was introduced as a citizen of Turkey and our professional tour guide. We then spent the next two hours driving around Istanbul with our tour guide narrating the trip in crisp, clear Bulgarian and, obviously, keeping me awake.

Since the tour was in part an AUBG-sponsored event, a staff member from the AUBG International Student office went along, ostensibly to be the AUBG-liaison but also to be the designated English translator. The staff member, his name is Viktor, is a super nice young Bulgarian man who speaks English well enough to have a decent conversation in English: a lot of mispronunciations and syntax issues but well enough to understand what he is saying.

On the guided tour of Istanbul, however, Viktor frequently tripped over his language limitations. The Bulgarian tour guide would speak long and I guess elegantly about something, and often the Bulgarians on the bus would laugh at some joke he made, but Viktor would take the microphone and offer this translation: “There is a building on the left. It has a green roof…” I wrote that quote now, giggling quietly as I did. “On the right you can see the main train station. That’s where to go if you need a train…” Honestly, that was what he said. Another line I wrote down was this: “We just passed a mosque, you can’t see it now, but it’s very old and important.”

So, yeah, my panoramic tour of Istanbul was me just looking out the window and checking out the scenery as we drove past. Beautiful, crowded, incredibly old. That’s what I saw. 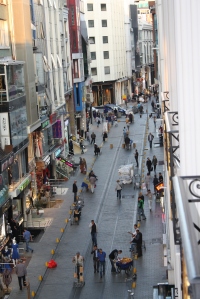 The bus finally stopped and we all got off and hiked up a narrow cobblestone street in what I was told was the old part of Istanbul. I could guess that from the rock-encrusted castle walls or the occasional small but crumbling fortress we would pass. As soon as we got to an area full of shops and restaurants, all of the students took off on their own. I stayed with the Bulgarians because, well, what else was I going to do?

We eventually ended up at the Roman Hippodrome, the actual spot in Istanbul where they once had chariot races and the occasional slaughtering of slaves. In the middle of what was once an arena now stands the Obelisk of Theodosius, a four-sided concrete obelisk originally built for Tutmoses III in Egypt about 1450 BC but later moved to its current location by a Roman general, Constantine the Great.  Our Bulgarian tour guide probably talked about all that, but I didn’t understand anything until I found a large plaque that explained, in English and five others languages, what was going on.

That’s when it hit me. Holy shit. This obelisk, which still has very-clear Egyptian hieroglyphics, belonged to King Tut! The Egyptian pharaoh! Three-thousand years ago!! Holy crap, it was probably as close to a truly authentic oh-my-God moment as I’ve ever had. Holy motherfucking shit, really. I still freak a little thinking about it. I was standing next to an artifact from the 18th Dynasty of Egypt, confiscated (stolen?) by the son of Caesar and Helena of Troy. Holy fucking shit. Constantine placed the obelisk in the center of Byzantine, the city he claimed and later renamed after himself, Constantinople, which then became the capital of the Roman Empire for a thousand years. And there I was, a very tired American on a Bulgarian tour in the city of legends, standing next to a true piece of human history. Holy fucking shit.

So, yeah, I ditched the Bulgarians. Nobody seemed to miss me. I kept visual sight of them (for one thing, they knew where the bus was parked), but on my own I toured the Blue Mosque, 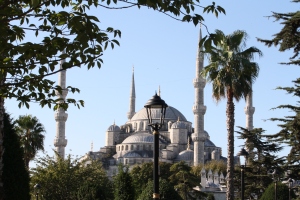 ate some very dry bread with olive jam (hey, I thought it was mint), and generally had fun sneaking into the many different tour groups canvassing the area. Each group had a guide carrying a small flag from their home country. Norway. Japan. Iraq. Russia. It was an almost surreal melting of man, each with their own language but everyone connected by a joined adventure, and I was the international interloper, belonging not to geography or ethnic origin but instead only to this moment, my place, as it were, in all this history.

The Bulgarian tour group poses for a group photo. They didn’t seem to mind (or notice?) that I was not in the picture.

And that was how I spent the next two days. By myself, walking, getting lost, navigating the trains and language of Turkey as best I could, eating food I did not recognize at great restaurants and out of food carts on a sidewalk.

An Istanbul train (I managed without getting lost)

The hotel was small but okay (Viktor was my assigned roommate, but I saw him only in passing). There were many planned group outings, but the only one I joined was for a boat tour on the Bosphorus Strait, the actual body of water separating Europe from Asia. And even then, I grabbed a corner spot along a back railing and literally tuned out the Bulgarian narrative guide. I knew we would be passing something important when everybody starting taking pictures, but I mostly just enjoyed a nice boat ride along the beautiful Turkish coast. 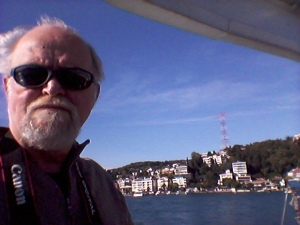 A selfie from the back of the boat on the Bhosphorus

I did not say anything to the university (except, I guess, for now when they read my blog) about how superbly uncomfortable and annoying it was to pay for a tour of Istanbul that I could not participate in nor enjoy. Istanbul is now part of my life journey, and I appreciate the opportunity that got me there, but the tour itself was frustrating and, at times, downright stupid. I guess a good example is the nice looking gold-colored ink pen I was given when I first boarded the tour bus in Blagoevgrad. Everyone on the tour got a pen, our names stenciled on the side next to the tour company logo, a nice little piece of merchandising swag. I clipped the pen to my shirt pocket and forgot about it. However, when we got to Istanbul and I decided I wanted to take notes on the truly funny translations of our panoramic tour, I tried to get the pen out of my pocket. However, very poor craftsmanship had left a tiny piece of metal casting on the edge of the pen’s clip. And in a nice bit of metaphorical representation of all my interaction with the Bulgarian way, when I finally wrestled it out of my pocket, the pretty little pen had ripped a hole in my shirt. ‘Nuff said.